The main policy instrument aimed at fostering the consumption of advanced motor fuels in Spain is the biofuel quota obligation. Wholesale and retail operators of fuels, as well as consumers of fuels not supplied by wholesale or retail operators, are obliged to sell/consume a minimal quota of biofuels. Each obligated subject has to present a number of certificates to a national certification entity to prove compliance. The National Markets and Competition Commission (CNMC), Spain’s independent regulator of the energy markets, was entitled as the certification entity. Certificates have a value of 1 toe. They can be carried over to the following year (up to 30% of the annual obligation) and can also be traded. In case of non-compliance with the targets, a penalty fee applies. In case of over-compliance (some parties selling or consuming more than they are obliged to), the amounts collected from the penalty fees are redistributed by the certification entity proportionally to the subjects that sold/consumed biofuels exceeding their set quota obligation. Mandatory targets for sale or consumption were established in Royal Decree 1085/2015, on the promotion of biofuels. The target (in energy content) for 2020 was 8.5%. In 2019, double counting of some biofuels entered into force.

In 2020, the CNMC issued a regulation (Circular 5/2020) which develops provisions intended to manage the certification mechanism. It establishes the requirements to be fulfilled by obligated parties and sets a maximum limit of 7.2% for biofuels produced from food and feed crops as well as an indicative target of 0.1% for advanced biofuels (according to the definition established in the Directive (EU) 2018/2001 on the promotion of the use of energy from renewable sources).

The CNMC also published in 2020 a document including the list of feedstocks which can be used to produce biofuels that can be accounted for the obligation. The list specifies whether a feedstock will be single counted or double counted as well as the information requirements regarding the mandatory sustainability criteria that operators have to meet.

A draft Royal Decree to modify Royal Decree 1085/2015 was published in 2020 by the Ministry for Ecological Transition and Demographic Challenge. It aimed at responding to the needs to implement the measures and achieve the ambitious objectives established in the integrated National Energy and Climate Plan 2021-2030, in accordance with its Objective Scenario and with the share of renewable energy in transport for the year 2030 established by the Directive (EU) 2018/2001. It was released after a public consultation which included questions related to the level of the mandatory targets, the possibility to introduce specific targets for aviation or maritime biofuels, the obligated parties, the double counting feedstocks, the maximum limits for some biofuels, the sustainability criteria, the National Sustainability Verification System and complementary options to reduce GHG emissions, among others. The draft Royal Decree proposed mandatory targets for biofuels (in energy content and including double counting for some biofuels) of 9.5% in 2021 and 10% in 2022.

In 2020, the Spanish Government approved the “Hydrogen Roadmap: a commitment to renewable hydrogen.” It is intended to identify the challenges and opportunities for the full development of renewable hydrogen in Spain, providing a series of measures aimed at boosting investment action, taking advantage of the European consensus on the role that this energy vector should play in the context of green recovery. The Roadmap provides a Vision 2030 and 2050, establishing ambitious country targets in 2030. In particular, regarding transport, the following milestones are envisaged by 2030:

Biofuels account for the largest part of alternative transportation fuel in Spain. The main contribution corresponds to biodiesel (FAME), the second most used biofuel is HVO and the third one is bioethanol. Other alternative fuels consumed in Spain are natural gas and LPG. Figure 1 shows the share (in energy content) of fuels consumed for road transport in 2020. 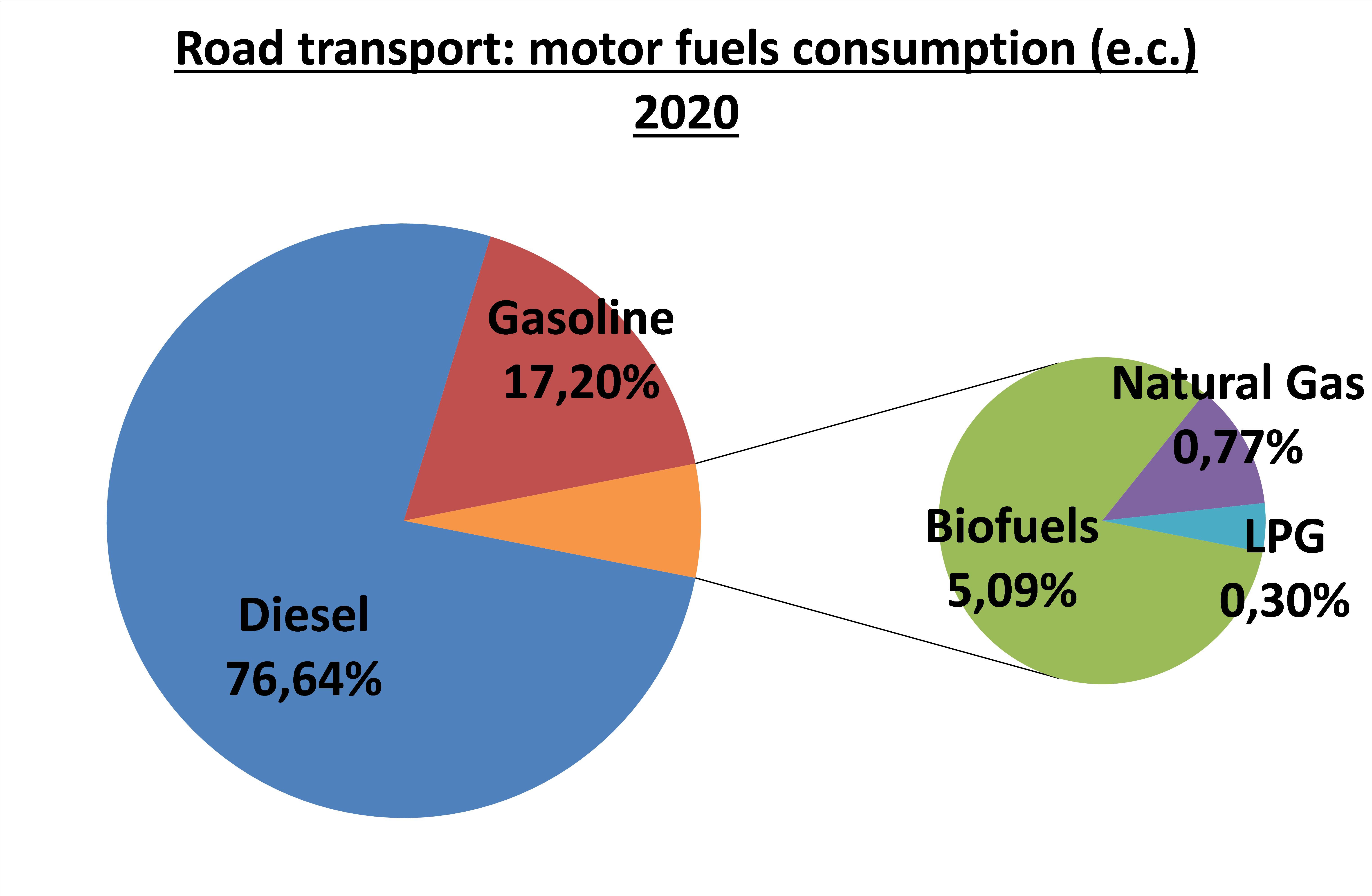 In Figure 2, the alternative fuels consumption in 2020 is shown. 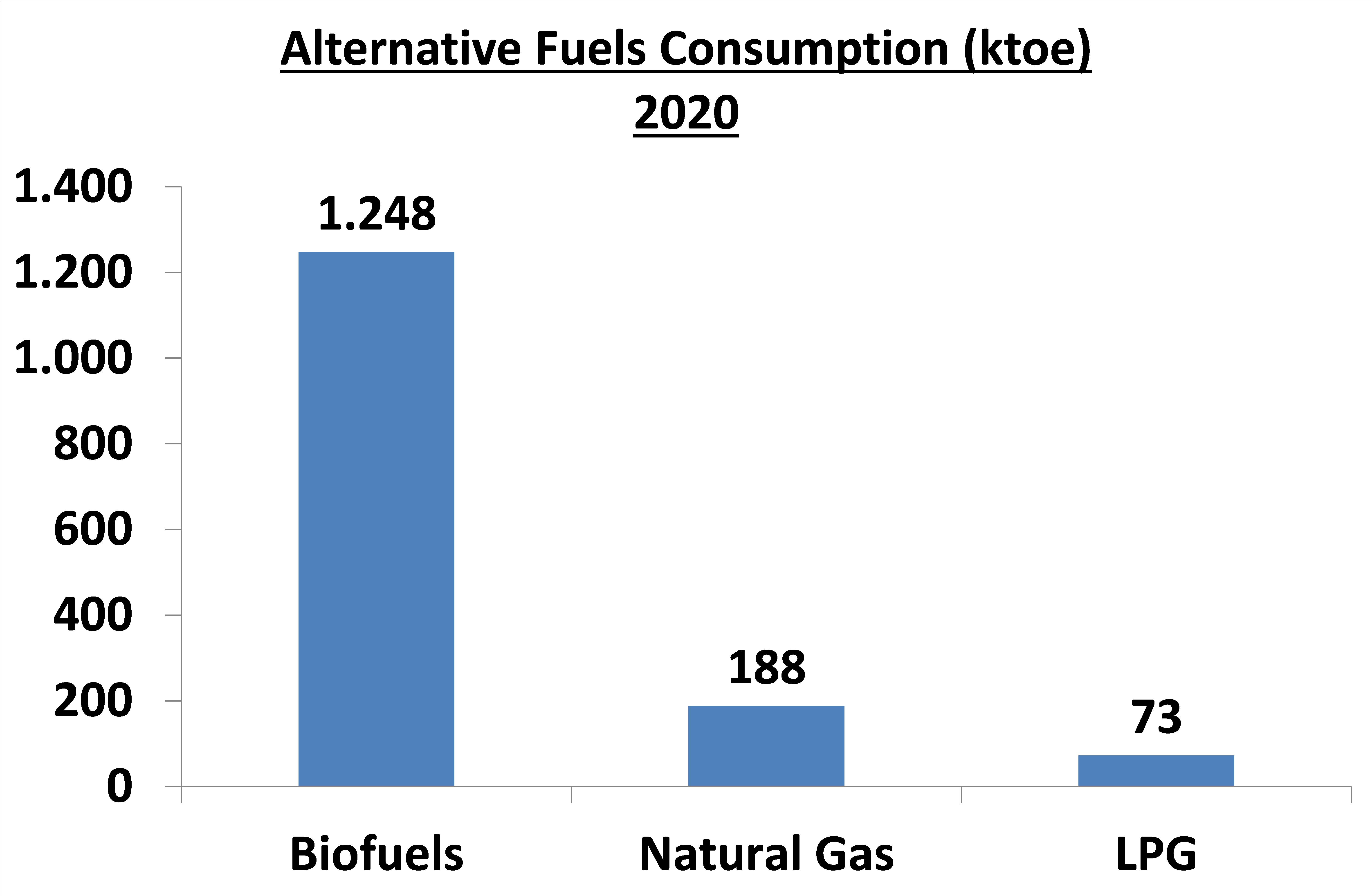 Regarding distribution, Table 1 shows the number of public filling stations with alternative fuels.

The Spanish State Scientific and Technical Research and Innovation Plan 2017-2020 is the main instrument for developing and achieving the objectives set in the Spanish Strategy for Science and Technology and Innovation 2013-2020, as well as those set in the Europe 2020 Strategy. Within the plan, eight major challenges for Spain were identified. The energy sector, including transport, is specially addressed in the following ones: “Safe, efficient, and clean energy,” “Bioeconomy: sustainability of primary and forestry production systems, food safety and quality, marine and maritime research, and bio-products” and “Sustainable, intelligent, connected, and integrated transport.” The plan includes actions and funding mechanisms aimed at promoting RDI activities which are in line with the Strategic Energy Technology Plan (SET Plan). Regarding advanced motor fuels, research and innovation projects within this State Plan shall address the priority activities included in the SET Plan Action 8 for Bioenergy and Renewable Fuels for Sustainable Transport.

The National Action Framework for Alternative Energies in Transport supports research, development, and innovation by means of specific programs related to creation of clusters for innovation, incentives, cooperation through technology platforms, and support to research centers.

The integrated National Energy and Climate Plan 2021-2030 (NECP), submitted to the European Commission under the Regulation on the governance of the energy union and climate action (EU/2018/1999), addresses general RDI areas, the development of advanced biofuels among them.

There are two National Technology Platforms dealing with topics related to advanced motor fuels. Bioplat is the Spanish Biomass Technology Platform. It brings together companies, research entities, universities and other organizations in Spain to develop and promote sustainable commercial development of biomass technology. It addresses tasks related to biomass resources, production processes and final uses (biofuels for transport, biogas and biomass for electricity generation and thermal uses, bioproducts, etc.). It also carries out activities regarding sustainability, regulatory framework, and social, environmental and economic impacts, including rural development, bioeconomy, circular economy and climate change mitigation. The Spanish Hydrogen Technology Platform (PTE-HPC) aims primarily at facilitating and accelerating the development and use in Spain of systems based on hydrogen and fuel cells for different applications, transport among them.

The Directive (EU) 2018/2011, on the promotion of energy from renewable sources, sets a specific target for the transport sector. Member States must require fuel suppliers to supply a minimum of 14% of the energy consumed in road and rail transport by 2030 as renewable energy. The contribution of biofuels produced from food and feed crops is limited up to a maximum 7%. Within that 14%, there is a dedicated sub-target for advanced biofuels (which are produced from feedstocks listed in Part A of Annex IX of the directive). These fuels must be supplied at a minimum of 0.2% of transport energy in 2022, 1% in 2025 and increasing to at least 3.5% by 2030. A specific methodology for the calculation of such shares (including different multipliers for some technologies) is provided in the directive.

According to the integrated National Energy and Climate Plan (NECP), in 2030 the share of renewable energy in transport in Spain will be 28%, well above the target established in the directive. The contribution of biofuels from food and feed crops will be 6.8% and advanced biofuels will reach 3.69%.

The main trends included in the NECP for energy consumption in transport over the next decade are the following:

The NECP includes a specific measure for the promotion of biofuels in transport. It consists of several actions aimed at supporting biofuels production and consumption, inter alia, mandatory targets, aid programs for advanced biofuels facilities and consumption objectives for aviation biofuels. In this regard, the Draft Law on Climate Change and Energy Transition also contains provisions on the establishment of a quota obligation for sustainable aviation fuels.

Major changes
The integrated National Energy and Climate Plan is the new framework for renewable energy in the transport sector, including biofuels. It has been developed in accordance with the revised Renewable Energy Directive for the period 2021-2030.

The “Hydrogen Roadmap: a commitment to renewable hydrogen” has been approved. It contains measures and targets for hydrogen development in Spain. As regards transport, specific milestones by 2030 have been set in relation with vehicles fleet and filling stations.

A regulation on the biofuels certification mechanism and a list of feedstock which can be used for biofuel production (including double counting raw materials) has been issued by the Biofuels Certification Entity.

A draft Royal Decree aiming to set new mandatory targets for biofuels in 2021 and 2022 has been published.

Benefits of participation in AMF
Membership in the AMF TCP provides wider and easier access to information on advanced motor fuels, as well as helpful analyses that can be used to guide national policies and programs. 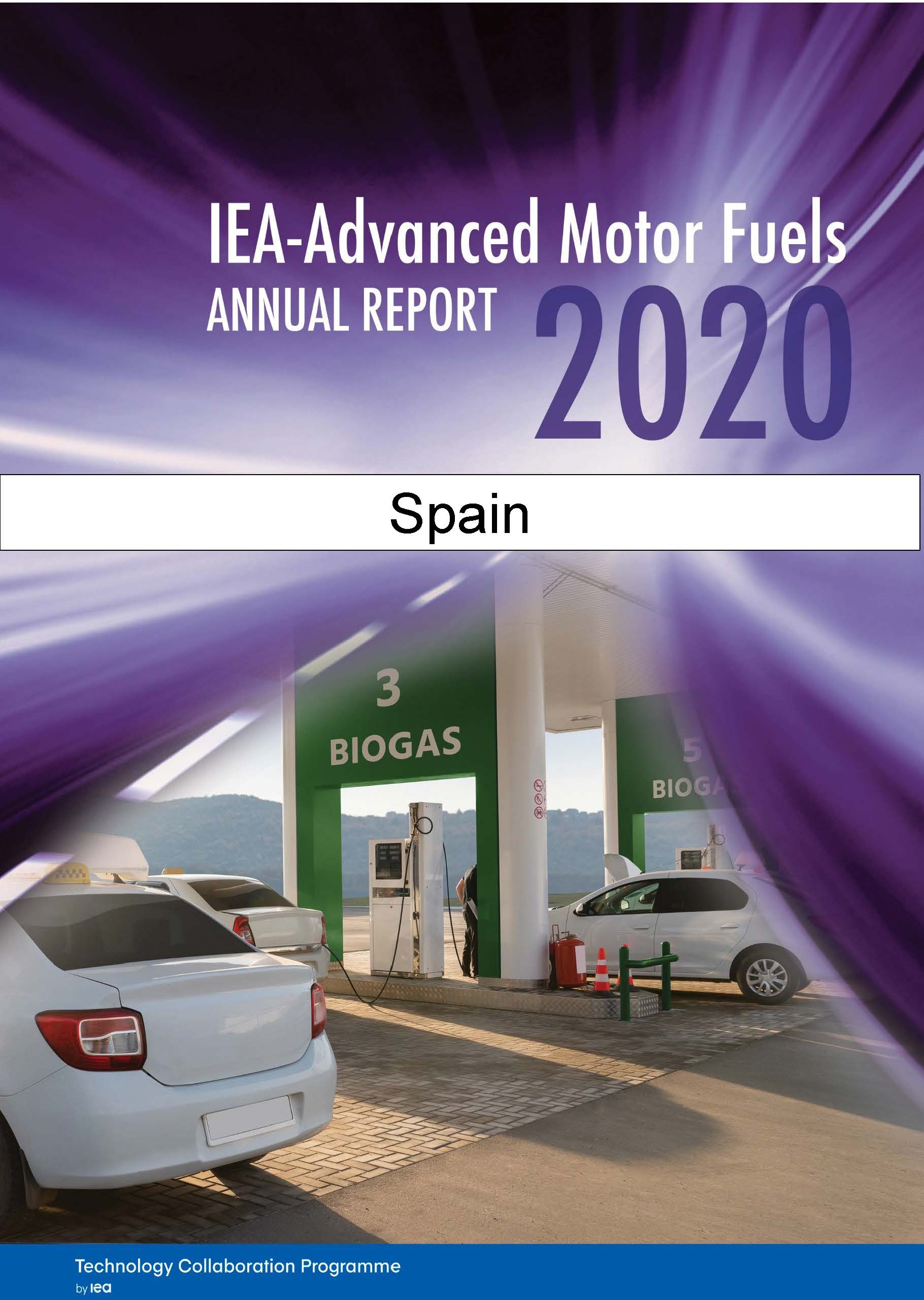 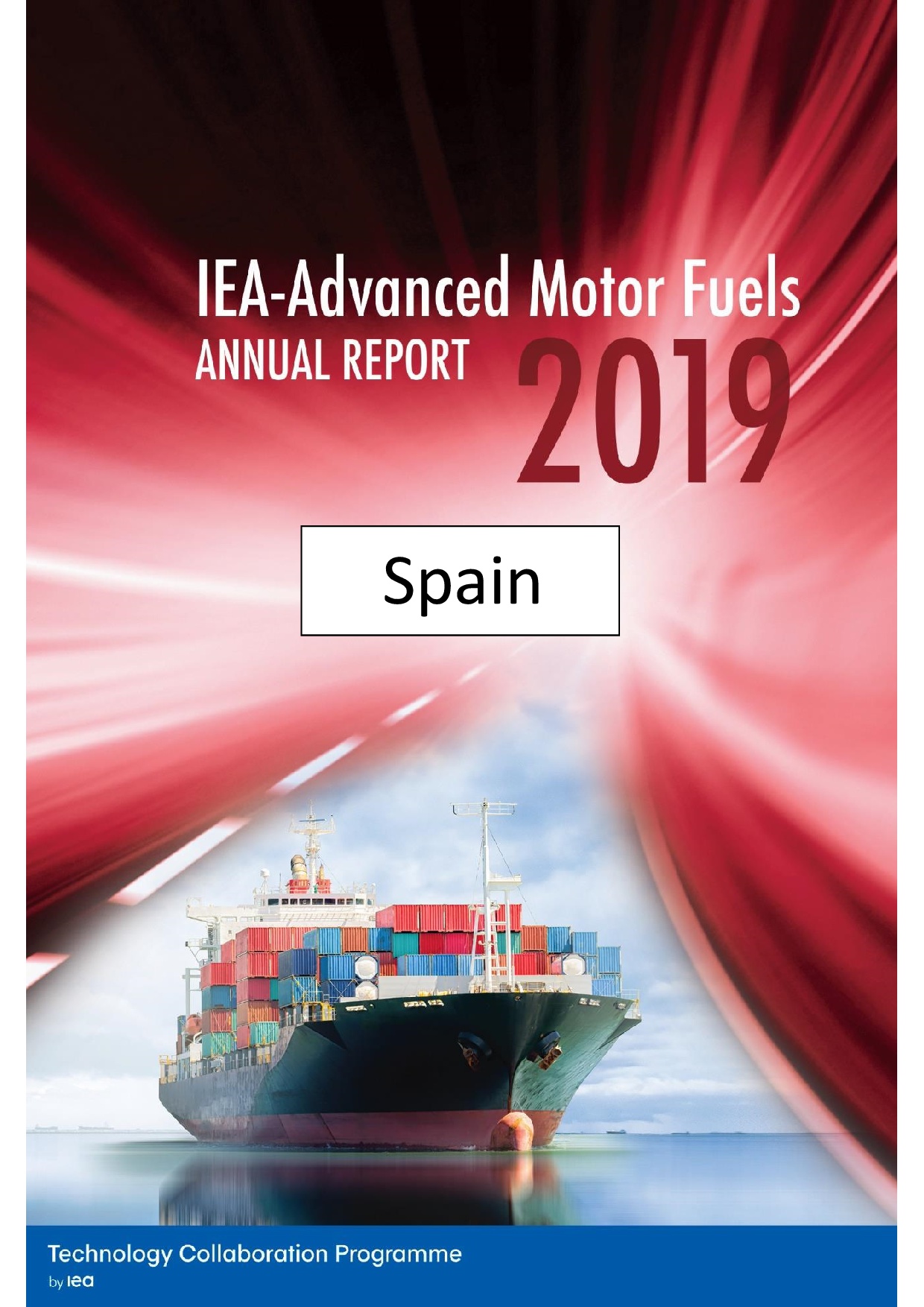