Chile has acquired and ratified ambitious international commitments to mitigate greenhouse gas (GHG) emissions in the face of climate change. In the long-term horizon, Chile will seek a way that allows it to achieve carbon neutrality by 2050, as established in the draft framework Law on Climate Change that is under discussion in the National Congress. On the other hand, as a goal in the short term, Chile is set to reduce the intensity of emissions by 30% by 2030 compared to the levels observed in 2007.[1]

Chile has great potential for the development of clean energy. It has the highest solar radiation in the world and a coastline of more than 6,000 kilometers, which gives it an enormous advantage to develop non-conventional renewable energies (NCRE), solar, wind, geothermal and marine. In fact, NCRE already generate more than 20% of the electricity consumed in Chile.

To achieve the proposed goals, a multisector effort will be required in the application of policies and measures that allow the effective and permanent reduction of Chile’s GHG emissions over time, with the transport sector being a relevant one in this area. In Chile, 36% of the final energy consumption corresponds to the transport sector and, of this fraction, 99% corresponds to oil derivatives, making it responsible for about 24% of the total emissions of GHG effect of the country. In addition, there is an impact due to pollution caused by combustion engines in urban concentrations.

Given the importance of energy consumption in the transport sector and its environmental implications, Chile has implemented policies for fuels with low sulfur content, local pollutant emission regulations (applying strict European and American standards for light, medium and heavy vehicles), and the establishment of green taxes applied to light and medium gas and diesel vehicles. In 2012, the energy efficiency labeling program was established—initially for light passenger vehicles and some years later for medium vehicles—allowing the buyer to choose the vehicle with the best fuel economy.

Energy Efficiency Law
The Energy Efficiency law was passed in Congress and will be published in early 2021. In terms of the transport sector, the law focuses on improving the energy efficiency of Chile’s vehicle fleet and it mandates that the Ministry of Energy regulates the interoperability of the charging infrastructure for electric vehicles.

In terms of energy efficiency, the Ministries of Energy and Transport will establish standards for light, medium and heavy new motorized vehicles, in 12, 36 and 60 months, respectively. The metric that will be used to define these standards will be the energy efficiency in kilometers per liter of equivalent gasoline in average terms for the total of vehicles sold by each representative or importer of the brand.

Currently, the Ministry of Energy is evaluating three proposed curves to determine one of them as the alternative to apply a curve with energy efficiency standards for light vehicles.

Euro 6 standard for light and medium vehicles
Chile will be the first South American country to require the Euro 6 emissions standard, which must be implemented 24 months after its publication on September 30, 2020. This means that vehicles will also have a particle filter that reduces particulate material with an efficiency of 99% and with a catalytic system that will reduce NOx emissions by 56%.

It is important to note that the reduction of fine particulate matter is a fundamental measure to protect the Santiago population. According to the International Agency for Research on Cancer (IARC), which is part of the World Health Organization (WHO), this type of emissions, generated by combustion engines, is associated with acute and chronic diseases, as well as different types of cancer, such as lung cancer and cardiovascular diseases, which is why it has been reclassified as a carcinogenic substance for humans.

In addition, the Euro 6 engine reduces global emissions of pollutants (CO2), due to its new technology that allows reducing fuel consumption and by lowering its emissions. It is estimated it will affect a 7% reduction in CO2 emissions.

Although the investment in an electric bus is higher in the beginning, these costs are recovered in a few years. This is because the operational costs, both energy and maintenance, are lower. Operators in practice have found at least the following advantages of the electric bus compared to the diesel bus: lower supply cost, less air pollution, and less noise pollution.

Electric buses have more economical maintenance since they require verification of fewer components and, in the case of the brakes, these wear less because the electrical system helps to brake the vehicle.

Finally, the electric propulsion motor takes up less space and is more versatile than the usual motors of traditional buses. In this way, the space is better used and distributed, gaining in convenience and comfort.

Electric taxis
The Ministry of Energy is coordinating a program for the replacement of basic internal combustion engine taxis, for electric ones. This program was developed during 2020 and was launched in January 2021. This new program seeks to promote electromobility in public transport, specifically in the taxi segment.

Called “My Electric Taxi Program,” this initiative is expected to benefit 50 taxi drivers in the Metropolitan Region. It provides co-financing of up to $10,900 to exchange a basic taxi for an electric   one, to purchase and install a home electric charger and to monitor the electric vehicle purchased for one year.

The main idea is to remove barriers so that taxi drivers can access electric vehicles, mainly in terms of initial investment, knowledge of technology and load management.

A taxi that travels 80,000 kilometers spends around $5.471 (US) on gasoline. If the same taxi were electric, it would spend around $2.325 (US) on electricity. In addition, an electric vehicle has cheaper maintenance than conventional vehicles. Therefore, it is very convenient economically and environmentally.

Public Transport of Santiago Bid
The award was made by resolution of the Ministry of Transport and Telecommunications, which must be subsequently processed before the general controller of the Republic.

A new offer is being made with a new design. In this offer, the bus supply is separate from the operation of the tracks. Among the main attributes and advantages that this tender provides to public transport are greater guarantees for buses and their components. Requirements and guarantees are established to have spare parts and local support. Overhaul or maintenance of the average life of buses and spare parts is required for: batteries, in the case of electric buses; internal and external security cameras; object proximity detection systems to avoid collisions; internal screens to display travel information, energy efficiency systems and driving quality. Safety requirements include training of drivers and maintenance personnel on the following topics: bus operation and components; security and emergency procedures; maintenance and energy efficiency. In addition, the new offer establishes computer and telemetry systems for better online control of the state of the buses.

Improve Energy Efficiency by Promoting Giro Limpio
Giro Limpio is a voluntary national program, administered by the Energy Sustainability Agency (Agencia SE), which seeks to certify and recognize the efforts made by freight transport companies in the field of sustainability and energy efficiency.

In addition, Giro Limpio certifies the cargo generating companies that prefer the certified Giro Limpio transporters, thus helping to reduce energy consumption and emissions of GHGs and other local pollutants that affect people’s health, and reducing the environmental impact of the various value chains in our country. Its main objectives are:

The Giro Limpio program currently has 13,500 trucks equivalent to 5% of the national fleet.

New Trucks Energy Efficiency Measurements
The objective is to obtain the fuel consumption in a sample of trucks in the fleet of vehicles that circulate in the cities and highways of the country, with the purpose of expanding the knowledge in the energy performance of trucks. Accumulating experience is necessary in order to address the standardization of the energy efficiency of these vehicles for the future in Chile.

The test procedure for Annex 57 was used as the basis for testing the trucks on the chassis dynamometer to ensure comparable results with other heavy vehicle labs’ performing measurements.

It was only possible to measure fuel consumption (km/l) and particulate matter in three trucks at this stage, but in the future we hope to continue measuring different categories of trucks.

Automotive Market
In Chile, there is no national vehicle manufacturing or assembly industry, so all vehicles sold in Chile are imported from different markets. In 2020, 258,835 units of light and medium vehicles of 60 different brands were marketed, with market shares that never exceeded the 15% barrier. The fact that there are no factories with large numbers of workers allows the regulations to the industry to be applied in shorter periods of time. 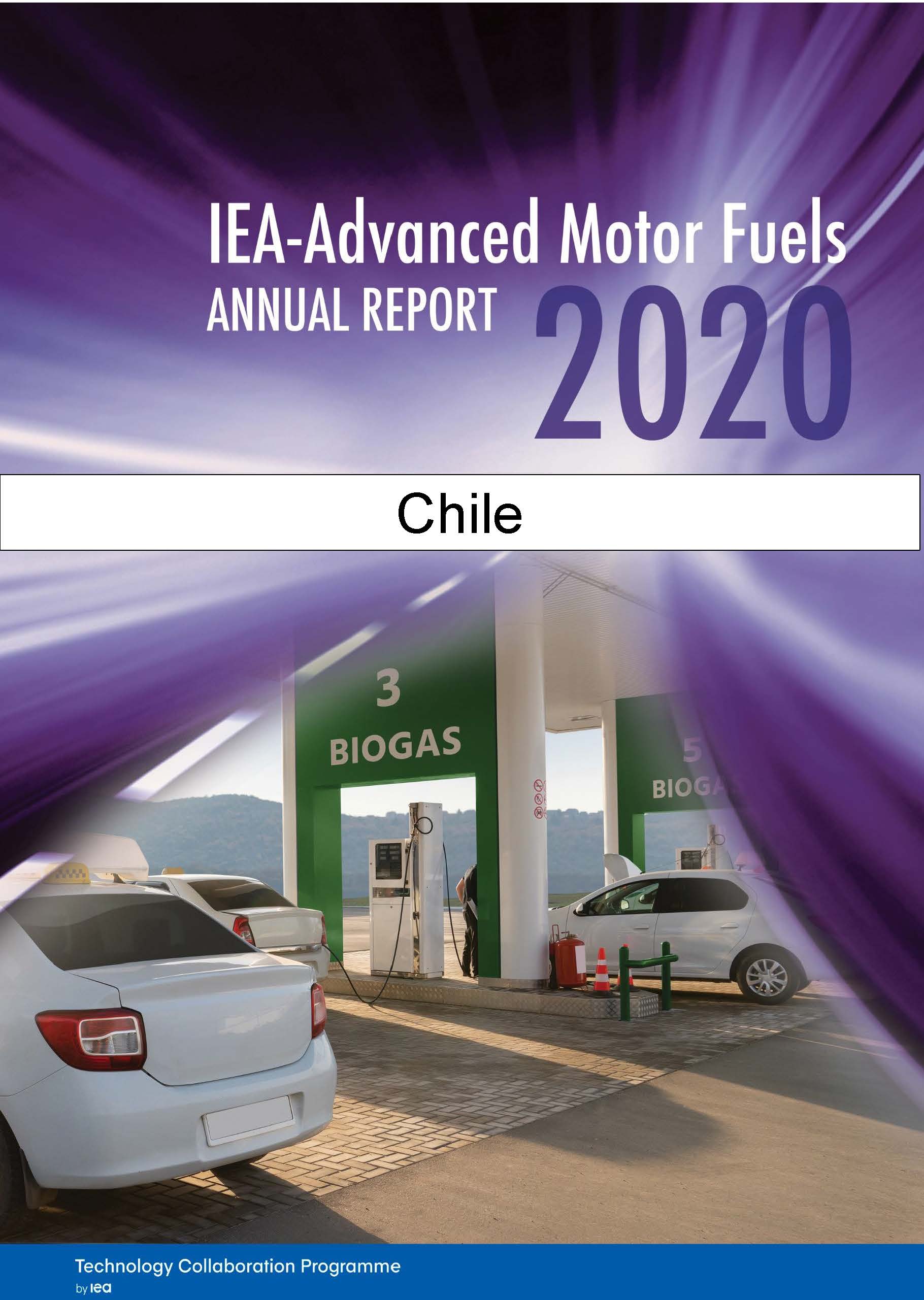