The transport sector, being the strongest emitting sector not covered by the European emissions trading system, emitted about 30% of the GHG in 2019. Passenger and freight kilometers increase continuously, which is the main reason why GHG emissions in transport have seen an increase of 75% since 1990. Due to reduced economic activities and lock-down restrictions applied as a result of the COVID-19 virus, a significant drop in GHG emissions is expected for 2020. First assumptions point to a reduction of more than -17% as the consumption of diesel and gasoline dropped by 17% and 20%, respectively, according to a market assessment by the Association of the Mineral Oil Industry (FVMI). However, a change of the long-term tendency cannot be derived from the pandemic year.

Austria is committed to carbon neutrality by 2040. This requires substantially increased decarbonization efforts across all energy sectors. Especially in the transport sector, a radical turnaround is needed to contribute to the political goal. Austria, therefore, plans a number of incentives such as a newly designed taxation system, which shall put a price on ecologically destructive activities. The new taxation system is planned to be presented in 2022. In addition, in the same year, an obligatory procurement of zero-emission vehicles by the public sector will take effect. Already put in place for 2021 are an increased NoVA tax and the “Right to Plug,” which alleviates previously complicated legal approval hurdles for the installation of charging stations for flat owners at their vehicle parking space in a multi-party building.

National strategies in the area of transport, such as the Mobility Master Plan and the corresponding RDI Mobility strategy plan, and in the area of energy, such as the Hydrogen Strategy Plan, will be published in 2021. However, a consistent overarching activity document listing measures, their expected contributions and corresponding KPIs (fully describing the path to climate neutrality in 2040) is not available yet. It is expected to be included in an updated Austrian NECP as the ambitious European Green Deal targets ask for a revision of the document in the near future.

The integrated National Energy and Climate Plan (NECP) is a new planning and monitoring instrument of the EU and its Member States. It is intended to contribute to improved coordination of European energy and climate policy and is the central instrument for implementing the EU’s renewable energy and energy efficiency targets for 2030. For Austria, the NECP main instruments are (1) to increase the share of renewable energy sources in the fuel sector, whereby in Austria the biogenic share in relation to the energy content of diesel is about 6.3% and for petrol currently about 3.4%, and (2) the Normverbrauchsabgabe (NoVA) tax, a bonus/penalty system for CO2 emissions levied when passenger cars are first placed on the domestic market (new car purchase or private import) which provides incentives to purchase vehicles with low CO2 emissions.

Starting in July 2008, the NoVA tax was introduced for taxing the acquisition of new vehicles. As of March 2014, new cars that emit less than 87 g of CO2/km are exempt from NoVA. Further reduction steps of 5 g of CO2/km per year are planned until 2024. Each additional gram results in a financial penalty of 80 € on the purchase price of a passenger vehicle. Pure biofuels are exempt from the mineral oil tax. CNG is exempt from the mineral oil tax as well but is subject to the lower natural gas tax.

Fleet Distribution and Number of Vehicles in Austria

According to provisional figures, the total fleet of motor vehicles registered in Austria amounted to about 7.1 million, which is, 1.5% more than in 2019. Passenger cars, the most important type of vehicle with a share of 71.7%, showed an increase by 1.0% to 5.1 million vehicles and crossed the 5 million mark for the second time in history. (See Table 1.)

Registrations of new passenger cars fell to 248,740, which is well below the 20-year average (313,297). This resulted in the highest year-on-year decline ever observed (2019: 329,363). In contrast to the overall decline, alternatively powered passenger cars – electric, natural gas, bivalent drive, combined drive (petrol or diesel hybrid) and hydrogen (fuel cell) – increased both in absolute and in relative terms (2020: 20.1% share with 50,060 vehicles; 2019: 8.0% share with 26,346 vehicles), thus boosting the trend toward advanced alternative propulsion systems (Fig. 1). 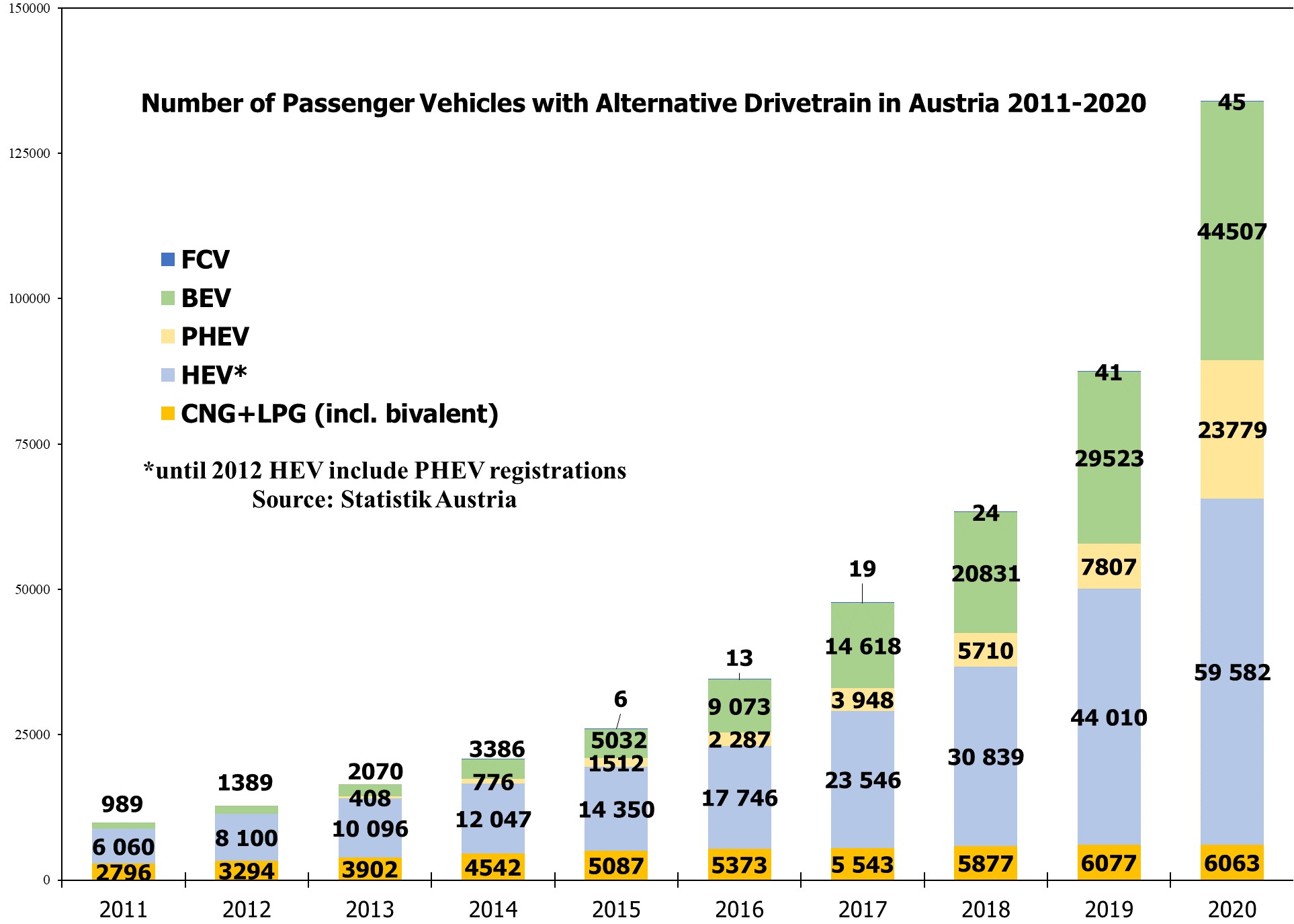 Especially for battery electric vehicles (BEVs) and plug-in hybrid electric vehicle (PHEVs), the trend is evident. With registration numbers of 44,507 and 23,779, respectively, the growth follows an exponential trajectory. The number of vehicles driven by CNG and LPG, including bivalent ones, shows a stable linear increase to 6,063. With 45 vehicles, the fuel cell electric vehicle (FCV) fleet is still negligible.

Austria has seven hydrogen fueling stations (HFSs), of which five are publicly accessible. For one, access is limited to companies, commercial enterprises, and municipalities; another is dedicated to hydrogen research. Except for the latter, all HFSs support a pressure of 70 MPa.

As part of the “Energy Model Region” initiative, made-in-Austria energy technologies are developed and demonstrated in large-scale, real-world applications with international visibility. In the coming years, the Austrian Climate and Energy Fund (KLIEN) plans to invest up to €120 million ($146 million US) in three Energy Model Regions. One such region—WIVA P&G— demonstrates the transition of the Austrian economy and energy production to an energy system based strongly on hydrogen. Particular emphasis is given toward the development of hydrogen transport applications like in the HyTruck – Hydrogen Truck Austria project.

Austria’s national action program for mobility management, called klimaaktiv mobil, supports the development and implementation of mobility projects and transport initiatives that aim to reduce CO2 emissions. Since 2014, 4,900 climate friendly mobility projects have been funded. Financial support for about 12,000 alternative vehicles has been provided. The klimaaktiv mobil website offers a map with details of each project. Total financial support amounted to €67 million ($82 million US) until the end of 2020.

The Energy Research Program provides research and innovation funding for the introduction and implementation of climate-relevant and sustainable measures and energy technologies. The strategic research focus is on sectors contributing significantly to GHG emissions, such as the transport sector. In addition, funding is dedicated to the participation of Austrian stakeholders in international organizations like the TCP under the umbrella of the IEA.

Mobility of the Future Program

The research program, Mobilität der Zukunft (Mobility of the Future), is an Austrian national transportation research and development funding program for the period 2012–2021. The program covers four complementary thematic fields: Personal Mobility, Mobility of Goods, Vehicle Technology, and Transport Infrastructure. The annual budget of Mobility of the Future is between €13 million and €19 million ($15 million and $24 million US). A project database is available online.

Austria is committed to reaching carbon neutrality by 2040, 10 years earlier than the EU. The supporting Government Program identifies alternative fuels as indispensable for reaching this ambitious goal. Advanced motor fuels play a crucial role in the Austrian Climate and Energy Strategy and are considered an important element for a successful Austrian transition toward sustainable mobility. A stronger focus towards biofuels and synthetic fuels in funding programs is in place.

The areas of deployment, though, depend on the use case. Electrification is the preferred option for use cases with limited energy requirements, such as passenger cars or light duty vehicles with limited mileage. For the latter RDI fundings, schemes are not directed at improving ICE drivetrains any more. For other use cases, such as heavy duty road transport, aviation or waterborne applications, RDI funding for alternative fuels is being provided. 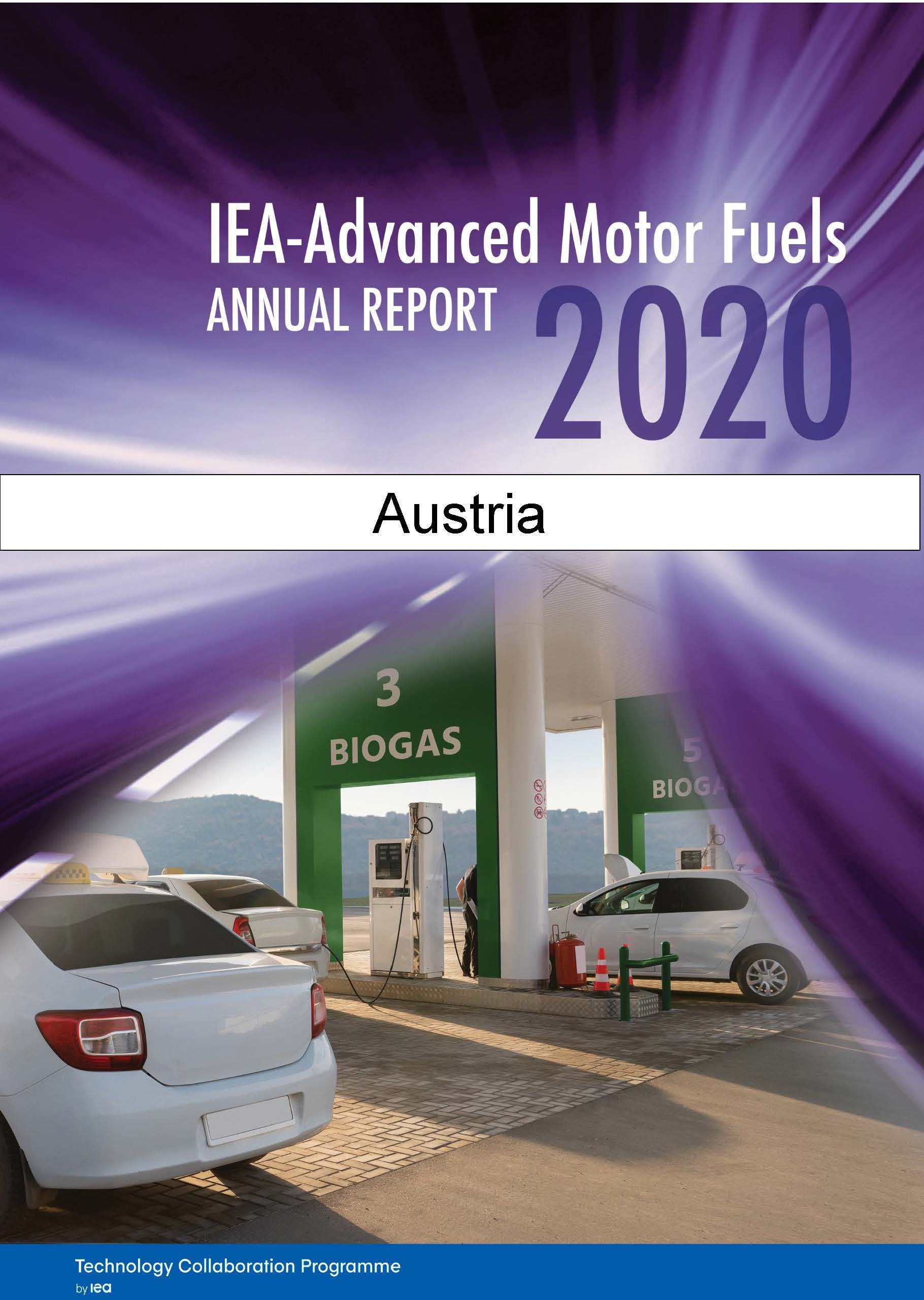 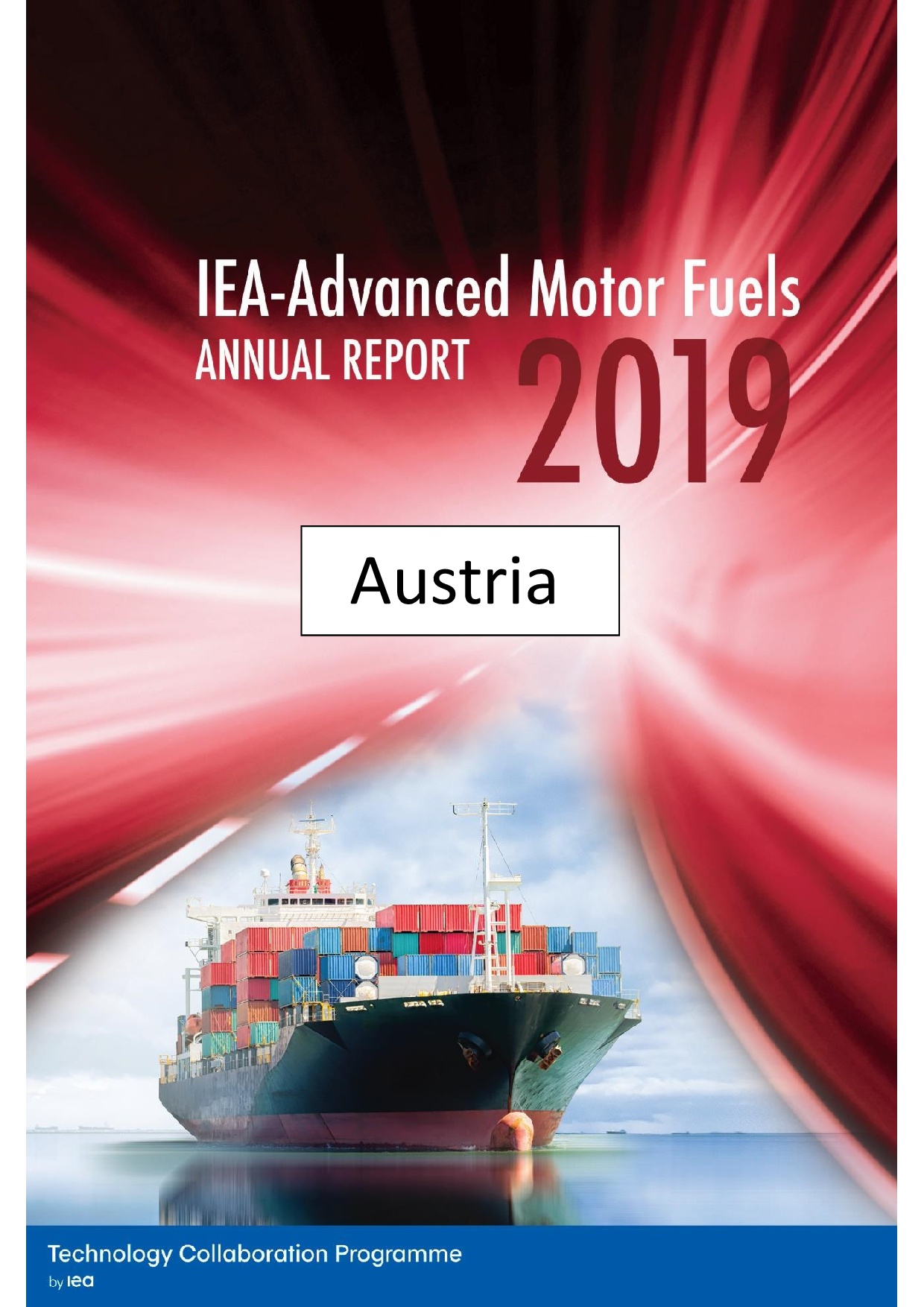