In December 2019, Denmark approved a new Climate Act that will include a legally binding target to reduce GHGs by 70% by 2030 (relative to 1990 level), to reach net zero emissions by 2050 at the latest, and to set milestone targets based on a five-year cycle. In the political understanding “A fair direction for Denmark,” it says that a reduction target by 70% by 2030 is a very ambitious goal, and that it will be particularly difficult to realize the last part of the goal (i.e., from 65% to 70%). Meeting the target will require currently unknown methods and, therefore, a close collaboration with the Danish Council on Climate Change and other experts. The climate act will be followed by climate action plans, which will contribute to ensuring that national reduction targets are met.

The Climate Action Plan in 2020 will include sector strategies and indicators at a minimum for central sectors such as agriculture, transport, energy, construction and industry. Moreover, Denmark has already taken the first steps toward establishing a professional and efficient energy sector as the basis for the transition to a sustainable green society. In June 2018, all parties of the Danish Parliament reached a political Energy Agreement to further build Denmark’s international positions of strength with a focus on renewable energy, energy efficiency improvements, research and development, and energy regulation. The measures and policies decided in the agreement are now in the process of being implemented.

Gross energy consumption has been relatively constant since 1990, with falling consumption of coal and increasing consumption of renewable energy (see Fig. 1). Gross energy consumption peaked in 2007 at 873 PetaJoule (PJ) and has since followed a downward trend. Gross energy consumption is expected to drop annually by 1.2% until 2020, after which it will rise slightly to 778 PJ in 2030, corresponding to amounts in 2017. Coal consumption will fall considerably by 14% annually until 2030, due in particular to the expected stop in the use of coal in large-scale Combined Heat and Power (CHP) production. In 2030, only the power station Fynsværket and the cement industry will consume large amounts of coal. However, some plants will retain the option for coal operation, although actual use is assumed to be limited. 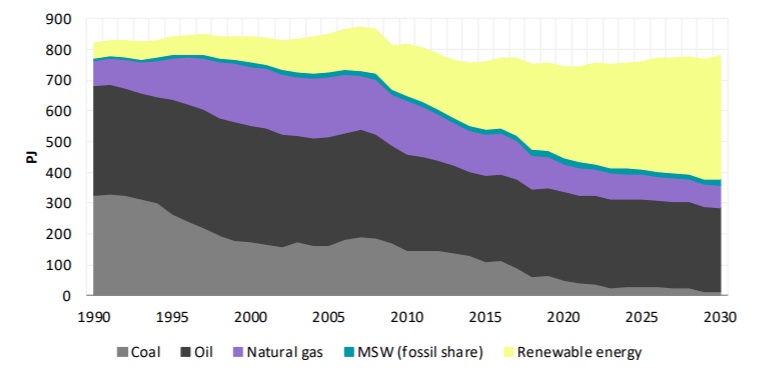 Fig. 1.     Gross energy consumption by type of energy 1990-2030 [PetaJoule (PJ)]. The calculation for 1990-2017 has been adjusted for outdoor temperature/degree days relative to normal years (climate-adjusted) and electricity trade with other countries.

Figure 2 shows the total share of renewables (RES) as well as renewables shares for transport (RES-T), electricity consumption (RES-E), heating and cooling (RES-H&C), and district heating (RES-DH), respectively, calculated on the basis of the method described in the EU Renewable Energy (RE) Directive (EU, 2009; Eurostat 2018). 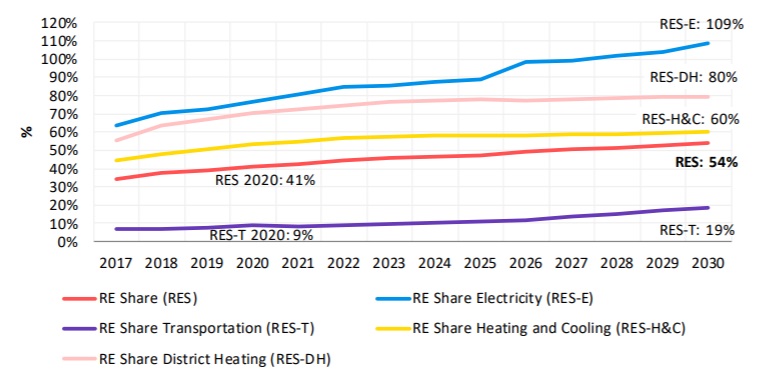 The RES and RES-T are subject to binding national EU targets in 2020. The EU RE Directive also sets out a 2030 target for 27% renewables for EU countries together, but this target has not been implemented as national obligations. Instead, EU Member States are obligated to account for their contributions to reaching the common EU target in their National Energy and Climate Plans. The projections show that the RES is expected to be 41% in 2020, whereby Denmark will have met, and exceeded, its EU obligation for a 30% renewables share by 2020. The RES-T will reach 9% in 2020, whereby there will be a shortfall of 1 percentage point compared with the RE Directive obligation of 10% in 2020. The overall RES will increase up to 2030, when it will reach 54%. The trend depends on the deployment of offshore wind, onshore wind and solar PV, and on the conversion of CHP plants to biomass, while energy-efficiency improvements in transport, industry, services and households will contribute to a lesser extent. The rate of renewables deployment in electricity supply is expected to exceed the rate of increase in electricity consumption, and Denmark’s production of electricity from renewables is expected to exceed Denmark’s electricity consumption from 2028. The RES-E is expected to increase to 109% in 2030. This trend is particularly contingent upon the offshore wind farms included in the 2018 Energy Agreement being commissioned by 2030.

There are also updated expectations regarding deployment of commercial solar PV (ground mounted solar farms) and expectations regarding replacement of older onshore wind turbines with fewer, more efficient turbines. The projection of onshore wind and solar PV deployment depends on the development in electricity prices; maintenance of the level for tender prices achieved in the 2018 technology neutral tendering round; voluntary renewable energy targets from large consumers and the market for PPA/guarantees of origin. A high percentage of RES-E affects calculation of the RES-T because the RE Directive uses a multiplication factor of four for the renewables share of electric road transport and a multiplication factor of 1.5 for the renewables share of electric rail transport. With this background, RES-T increases to 19% in 2030, contingent on the number of electrified passenger cars and vans increasing to around 9% of the total number in 2030, and an increased use of electricity in rail transport. Greater use of bio-natural gas in transport will only contribute to a very limited extent. The blending ratio of biofuels in petrol and diesel is expected to be maintained at the current level in the absence of new measures. Fuel consumption for domestic air traffic is included in the calculation of the renewables share. The aviation sector has announced ambitious plans for biofuel blending, but as these announcements are neither binding nor reflect a profitable development pathway for companies in the absence of new measures, the plans have not been included in a renewables contribution from this sector. 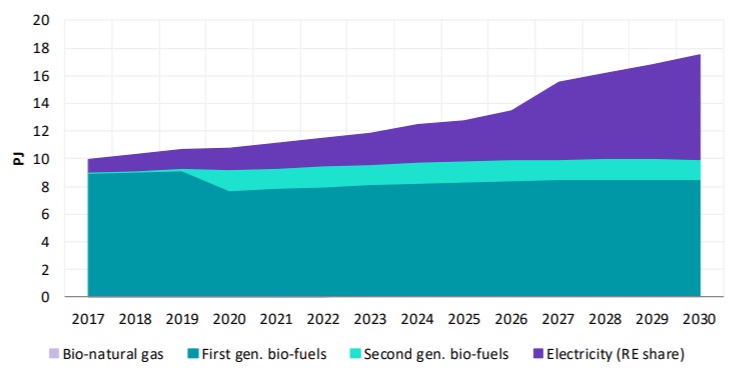 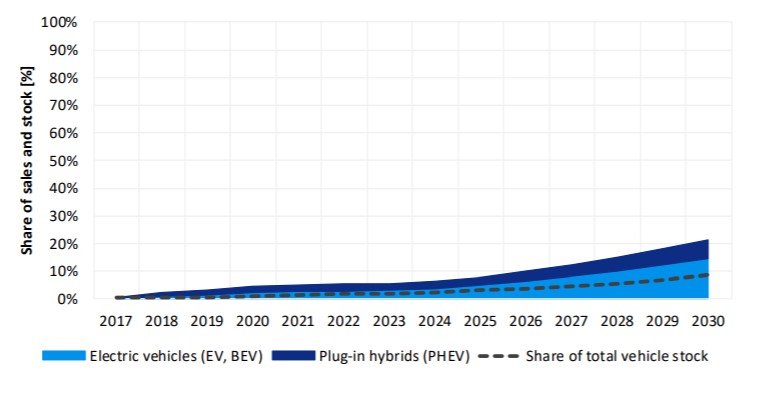 Research and Demonstration in Denmark are focused on electric vehicles and fuel cell vehicles for passenger cars. Several demonstration projects have been initiated. For HDVs, biofuels are the most obvious solution. However, liquid and gaseous electrofuels, which can store a surplus of wind turbine electricity, appear to be gaining attention. Research supporting analysis of common energy and transport fuels production systems also has high priority.

In Denmark, the transportation sector is still almost entirely dependent on oil. By 2050, the government aims to meet all Danish energy supply by renewable energy, including that required by the transportation sector. In 2012, a broad majority in Parliament reached an energy agreement defining initiatives covering crucial energy policy areas for the period 2012-2020, and agreed to discuss additional initiatives for the period after 2020. The analysis from 2012 indicates that by 2020 and beyond, electricity, biogas, and natural gas could become especially attractive as alternatives to petrol and diesel in the transportation sector. Electricity is the most energy-efficient alternative because of high efficiency in the engine and an increase in the share of wind-generated electricity supply. 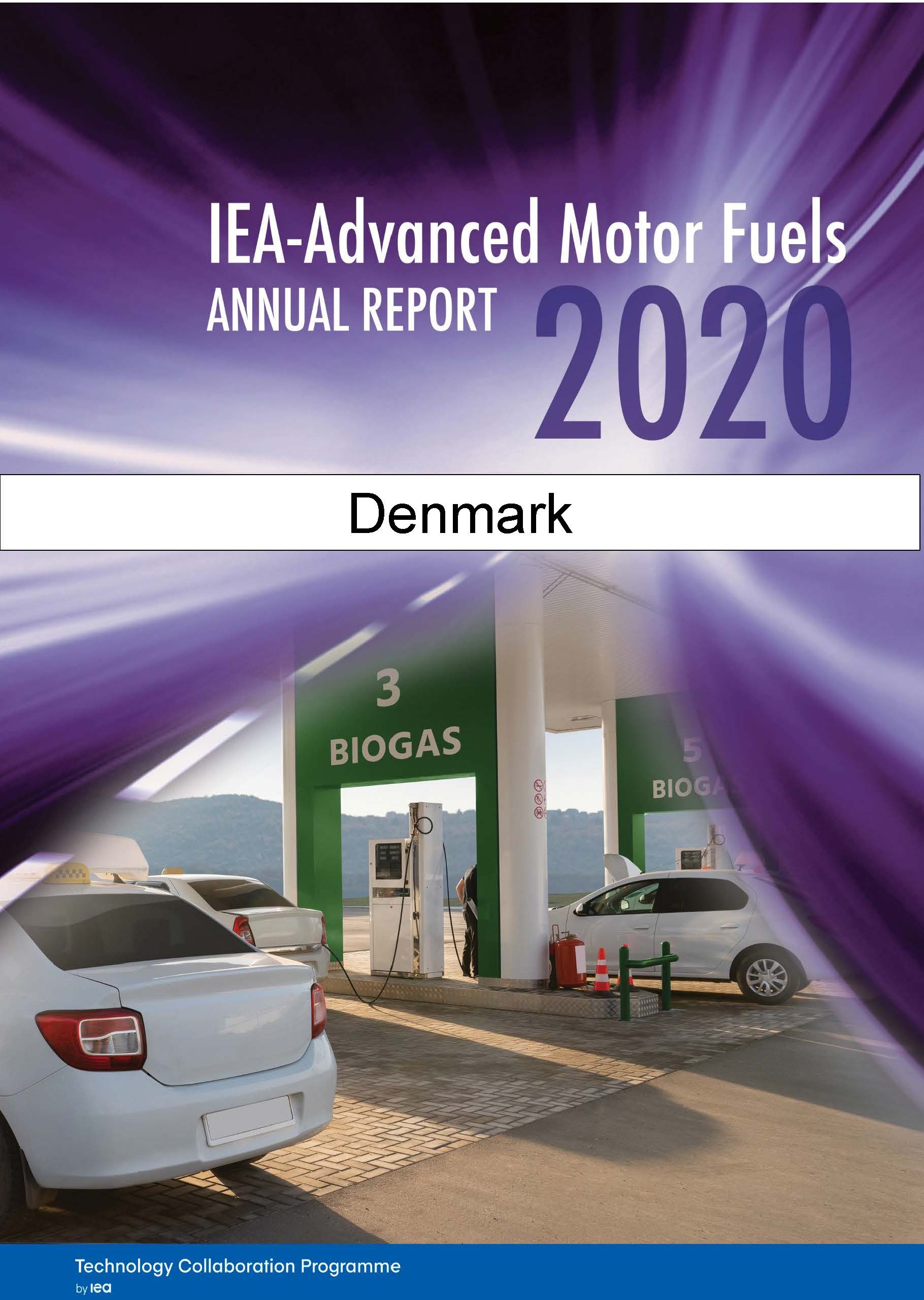 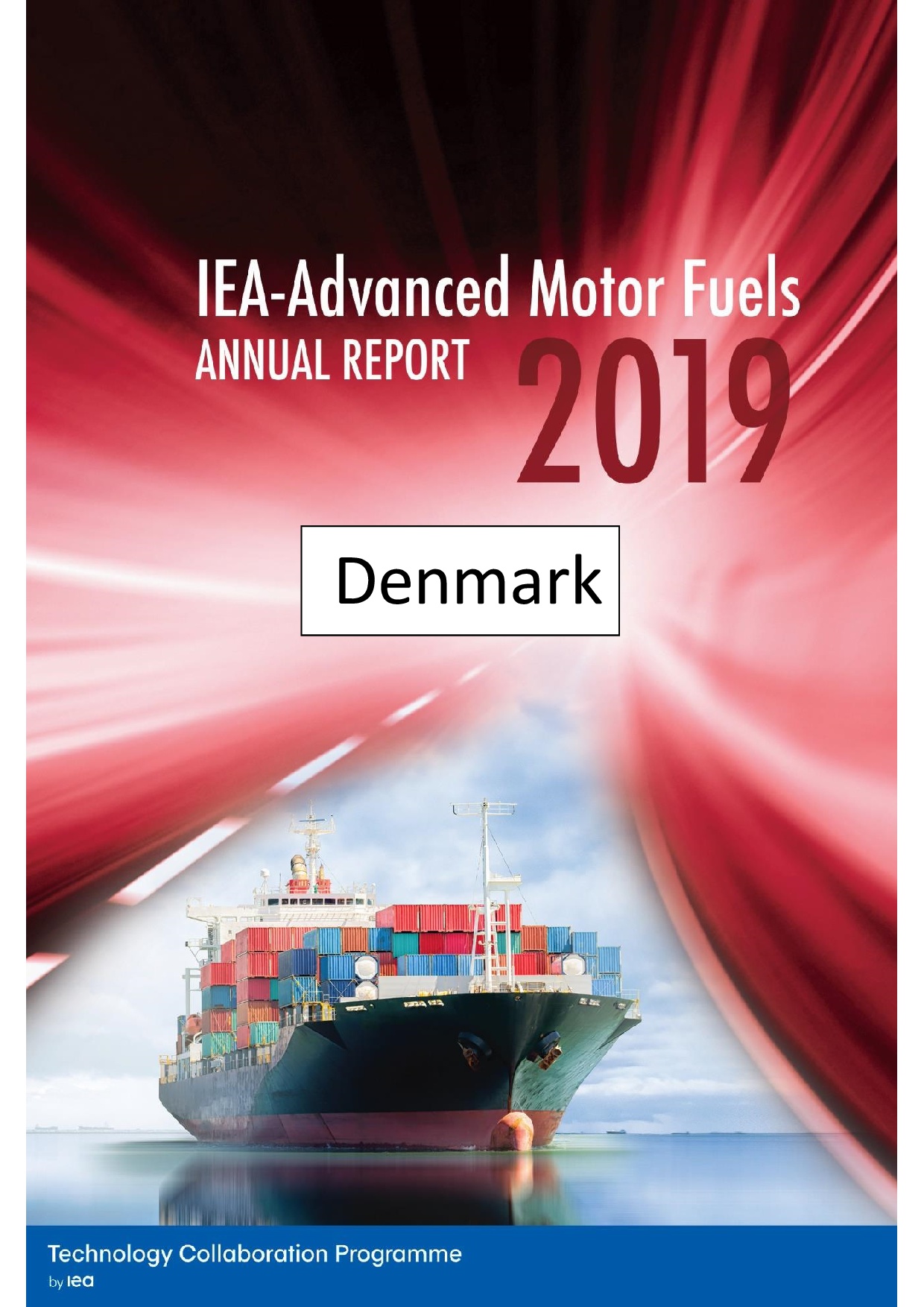